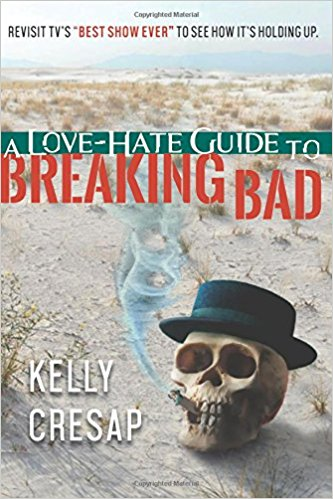 #New Warrior Kelly Cresap, a certified co-leader of 15 NWTA’s who has has staffed over 40 NWTA’s, along with holding many leadership roles in the ManKind Project Mid Atlantic Area has published a new book A Love-Hate Guide To “Breaking Bad” which has been very well received.

One reviewer commented “Most of the books I’ve seen about “Breaking Bad” have been by fans or are boringly academic, either patting the show on the back or trying to impress us with how much Heidegger someone has read. “A Love-Hate Guide” makes it feel as if they haven’t had much real skin in the game. We do have a national drug crisis, after all, but Cresap at least has a sense of humor about the show’s contradictions. He is willing to look at the good and the bad, which is what we all should be doing.”

Another reviewer writes “If Walter White’s center does not hold, Kelly Cresap’s does. His book *A Love-Hate Guide to Breaking Bad* dares to go big and be both funny and thoughtful.”

Cresap commented that “It sometimes felt as if it took the entire 16 years of my active engagement with MKP to give me the intestinal fortitude and emotional literacy to withstand the turns and undertows this project took me through. If you’ve seen ‘Breaking Bad,’ you may sympathize.” Further, he credited a number of men in MKP with giving him crucial support and advice as he wrote the book.

How does Cresap’s book overlap with the ManKind Project ? Near the end of the book Cresap makes a link between “Breaking Bad” and three out of four of the elements of male initiation:

“In tribal lore the rite of male initiation involves an adolescent going into the wild to test limits, measure endurance, and discover strength, to learn whether he has what it takes to become a man. This process is not only about the young initiate but the community to which he returns. The initiation consists of four phases: separation, descent, ordeal, and return.”

In Cresap’s view the TV series covers the first three of these, but not the fourth. He writes, “In the return phase, village elders ask these pivotal questions to determine the initiation’s value: What did you learn, and how will we all benefit?” Since that doesn’t happen in “Breaking Bad,” Cresap was inspired to ask these questions of viewers, and in effect to supply the missing return phase.